Lively Logan Square lies northwest of downtown Chicago about equidistant from downtown and O'Hare on the CTA Blue Line. At the center of its neighborhood intersecting at Logan Blvd, Kedzie Blvd, and Milwaukee Ave, its namesake green space is the popular resting point for residents, visitors, and bikers taking a break from their miles' long rides. Known for its outdoor summer Farmer's Market, booming art scene, culinary hot spots, and a popular nightlife scene, Logan Square is a charming, lively neighborhood with an unquestionable aura of hipness unseen in most other neighborhoods. A rapidly transforming neighborhood in the past decade and a half, you'll see newly constructed condos, three-flats, and single family homes sprouting up throughout this now highly desirable landing spot for young homeowners. All the while, you'll see century's old mansions and beautiful greystones lining its historic boulevards and side streets.The greater Logan Square community area includes not only its namesake neighborhood, but also highly popular neighborhoods Bucktown and Palmer Square.

Showcasing a boulevard system unique unto itself on the city north and northwest sides, people embrace the lush, grassy medians of parkland which emerge from these roadways - offering a tree canopied, yet urban retreat. A master plan conceived in the late 1800s, Logan Square serves as the northernmost point of the Chicago Boulevard system, originally conceived in the late 1800s as 26 miles interconnected boulevards stretching well into the south and west sides. On any day throughout the year - especially when weather promotes it! - you'll see Chicagoans enjoying a quiet afternoon of rest and relaxation. Because of the boulevards, Logan Square has always been a central point for the city's recreational bike riders.

In recent years, there's been a changeover as new, posh condos emerge throughout the neighborhood, stretching the rise in real estate activity up and down Milwaukee Ave. Trendy eateries and cocktail lounges pepper its streets, giving it a...ahem..."hipster" vibe which has made it a Saturday night destination for all young Chicagoans in search of the latest and greatest hotspots.

And you'd be remiss to not take advantage of the Bloomingdale Trail, i.e. the "The 606," which runs along Logan's southern boundary. Erected atop the old Chicago & Pacific Railroad tracks, this once industrial rail line was rededicated as public green space in 2015. A true neighborhood achievement born of a collaborative effort amongst residents, City Hall, the Park District, and private business enterprise, this nearly 3-mile trail is utilized by all Chicagoans year-round. Not surprisingly, development around The 606 has followed, combining landscape and architectural breadth to this already desirable enclave of town.

Properties In The Neighborhood

Take a look at the properties for sale in this neighborhood. 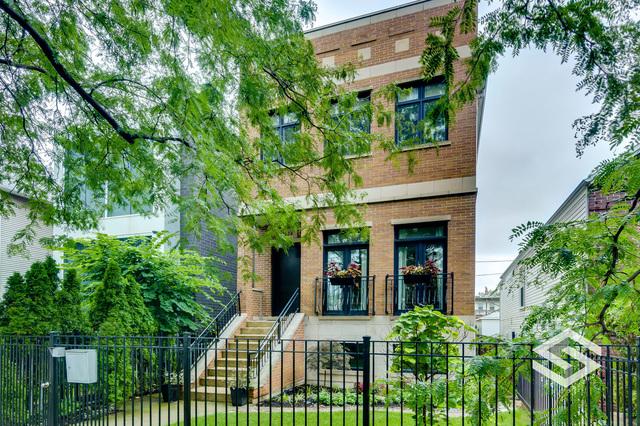 Client-focused and well-educated in all things residential real estate, Eric successfully guides his clients throughout Chicago's Northside and the suburban North Shore, from start to finish. It's his passion. It's his purpose.